In its Speech from the Throne, the Dexter government announced its intention to declare a day dedicated to remembering all Nova Scotia fishermen and women lost at sea.
The speech, made on Tuesday afternoon by Lt.-Gov. J.J. Grant opened the spring sitting of the Legislature.
In making the announcement, the Lt. Governor noted the recent loss of the five local fishermen on the Miss Ally.
“Communities like Woods Harbour know that the ocean provides bountiful abundance but can exact a terrible toll. Just 40 days have passed since five young fishers -- Katlin Nickerson, Billy Jack Hatfield, Joel Hopkins, Steven Cole Nickerson and Tyson Townsend -- were lost when the Miss Ally capsized in the stormy sea. Those young men sought only to make a living and support their families,” he said.
In the wake of the tragedy, former Shelburne County resident Phoebe Malone was one of those who had been pushing for the province to set aside a day to honor the men and women who work on the sea.
She circulated a petition and set up a Facebook page called Fishermen’s Day in Nova Scotia. The page received thousands of likes on Facebook. 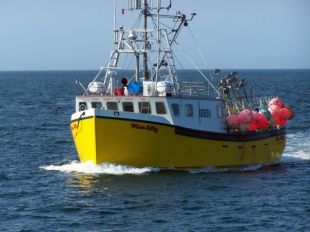 Thank you to all our sponsors that have helped get the Lobster Bash started.  To see who has helped or to find information on how you can become a sponsor....click the tab above in our menu bar.
Thanks again to all those who have helped out financially so far, and we look forward to even more support from businesses as the event draws closer!  Don't miss out.
Posted by acmaves at 17:21